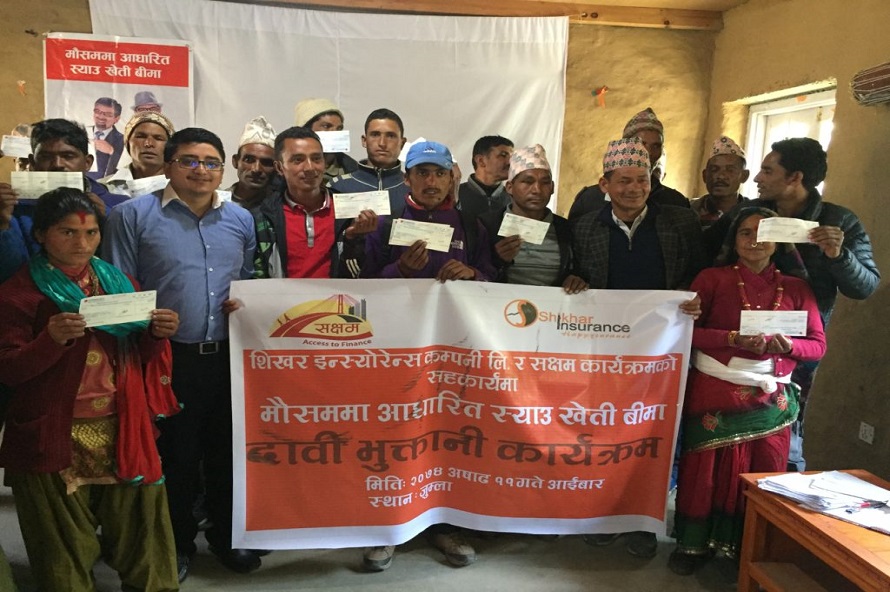 Ms. Jalaki Sara Adhikari (extreme left in the above picture) of Jumla was elated this week to receive a cheque of NPR 4,382 from Shikhar Insurance Company, Ltd. (Shikhar). The cheque paid her claim after a bad hailstorm had come and destroyed her crop. Luckily, she had weather index insurance, which protected her. The insurance product was designed and launched by Shikhar in collaboration with UKaid Sakchyam – Access to Finance Programme (Sakchyam).

“The hailstorm had destroyed my apples, which was a devastating loss for me,” shares Adhikari. “So, to be able to get this payment despite the financial loss I faced is a huge relief,” she continues. Now, because of this payout, Adhikari will be able to re-invest in the apple plants and continue to pursue apple farming, which is one of the main sources of income in this remote Karnali district.

Adhikari, along with 104 other apple farmers have received claim payments for apple insurance under the WII Policy that they had enrolled in March this year. The remaining farmers in Jumla and other districts are also in the process of receiving their claims. During the programme, the minimum claim payment was for NPR 2,921 and the maximum claim amount was for NPR 14,605 against their premium amount of NPR 430 for 10 Apple trees. The Government of Nepal (GoN) has also subsidized 75% of the premium as part of its efforts to promote agricultural insurance.

Realising the increased vulnerability of smallholder farmers due to weather-related risks, Sakchyam collaborated with Shikhar Insurance to introduce WII to apple farmers from Jumla for the first time in Nepal.

After conducting a feasibility study and analyzing 30 years of historical weather data of a weather station based in Chandannath, Jumla, Sakchyam’s WII product was developed to cover drought. Hailstorm was added as an additional rider.

Unlike other insurance products, farmers do not have to go through the hassle to settle their claim; the claim is automatic once the pre-defined event happens. With the support and guidance of Beema Samiti, the regulator of insurance industry in Nepal, this product was launched in May 2016. Shikhar has now expanded the product to Kalikot, Mugu and Dolpa. “This has really helped in building confidence in farmers in the insurance mechanism, thus mitigating the risk which they are exposed to,” shares Dip Prakash Pandey, CEO of Shikhar Insurance.

“We believe that introduction of WII – a one of a kind product in Nepal – has been a crucial breakthrough in the Nepalese insurance industry,” says Baljit Vohra, Team Leader of Sakchyam. “Keeping this in mind, through this partnership, we are also in the process of developing WII for paddy and sugarcane in Kailali and Kanchanpur.”

What does an apple farmer in Jumla (Hilly region) have in common with a paddy farmer in Bardiya (Terai belt)?... (more...)

Global warming resulting from climate change has increased the intensity and frequency of droughts, violent storms and floods, all of... (more...)

Weather related risks has increased the vulnerability of smallholder farmers and has negatively impacted their livelihoods. In this scenario, Weather... (more...)