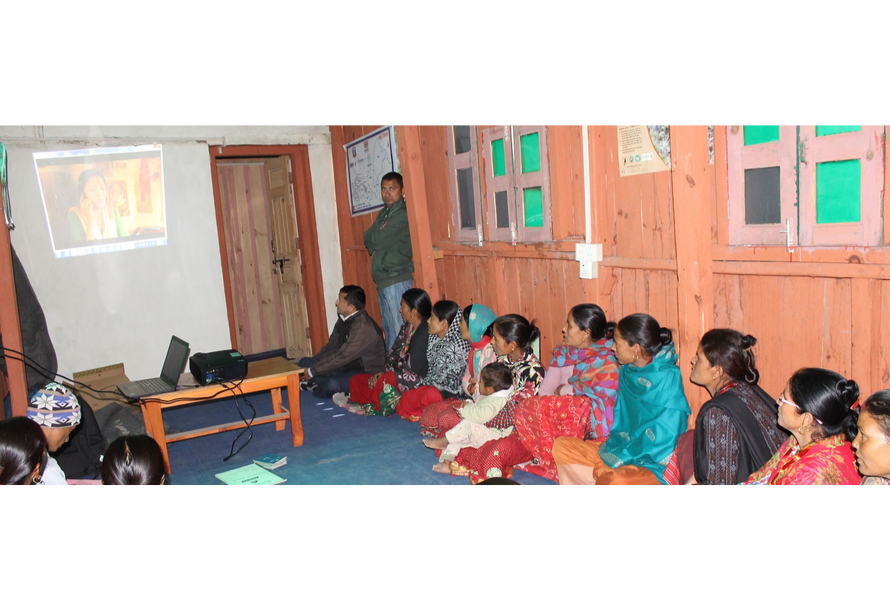 Like most men in her community, Komal Devi Saijuwan’s husband is working in Qatar in the hopes to make life better for his family. 30-year-old Komal is from Mugu – one of the most remote districts of Nepal and it is difficult for her to make ends meet for her family. However, this changed when she became a member of the ‘Chautara Self-Reliant Group’ of Nirdhan Utthan Bank Ltd. (NUBL) in May 2015.

Komal Devi Saijuwan’s got an opportunity to watch two videos on ‘Remittance’ and ‘Family Budgeting’. The videos, which were a part of awareness campaigns conducted by NUBL through Sakchyam Access to Finance Programme’s support, proved to be very useful for Komal. “The videos were fun to watch and I came to know about the formal remittance service providers in my community,” she says about the videos, which used comedy as its approach to disseminate information. “My husband always used to send money via his friends or other villagers and sometimes even strangers,” she shares. “But now, I have informed him about the formal channels – which is much safer.”

Not only that, but with the renewed information she had about savings and budgeting, Komal decided to take NPR 50,000 loan from NUBL and started a poultry farming business at her home. Not just depending upon her husband’s income, she is now earning around NPR 15,000 per month and is also sending her children to school with that money. Speaking about her prior experience, she says, “Prior to being a member of the NUBL Group, I used to take loans from local money lenders, and would end up paying a lot in interest.” She used to pay over 36% annual interest.

“Having my own business has given me a sense of purpose and I hope to expand the business so that my husband can come back home,” says a hopeful Komal.