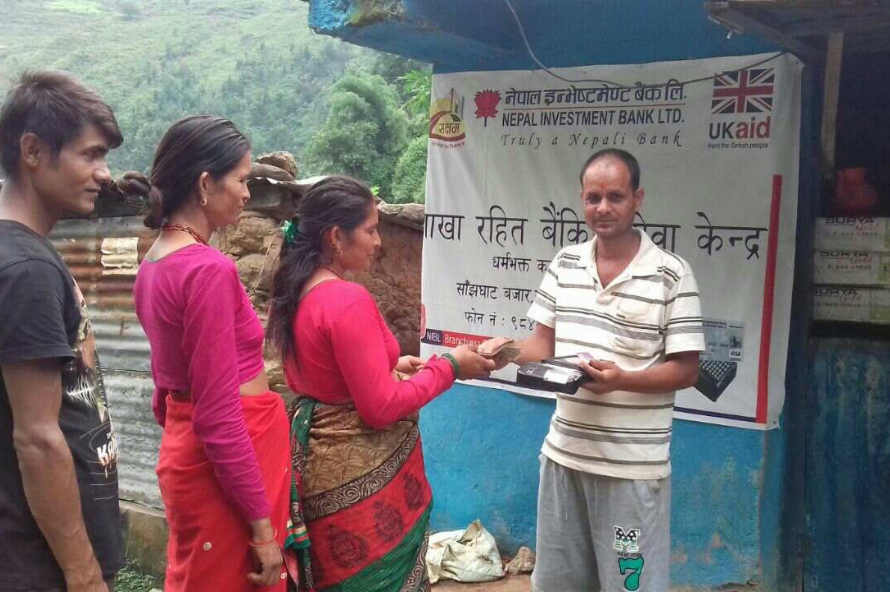 Up until about a year ago, Dharmabhakta Kathayat, a resident of Purbichauki Rural Municipality, Sajghat, Doti, managed a small stationary shop and also worked as a local electrician, insurance broker and cable television operator in his locality. “I had a decent income. But in a small community, it is difficult to increase your clientele and so the income also becomes stagnant after sometime,” shares Kathayat.

But after being appointed as a Branchless Banking (BLB) agent of Nepal Investment Bank Limited (NIBL) last year, things have turned around for him. “Last month alone, I earned nearly NPR. 46,000 as commission for the BLB operations,” says Kathayat, whose primary source of income now is the BLB Touchpoint established in his shop. “My income has more than doubled now,” he happily remarks. So far, he has opened nearly 2300 new accounts from seven adjacent village municipalities and collected nearly NPR 20 million as deposit from those clients.

His success mantra – “I try to make things easier for my customers; make sure that they do not have to go through much hassle. So, I carry my Point of Sale (POS) machine all the time and whenever I meet people and have good network, I start educating them on the importance of bank account and motivate people to open a bank account.” Kathayat also carries out door to door visits every three months and explains about the various advantages of becoming a formal client of the bank, importance of saving, credit, insurance and remittance services.

In his village, Kathayat is the sole ‘Banker’ and helping people in many ways in terms of providing access to finance and financial services.  He is facilitating to provide both remittance pay in and pay out services, mobile top up, selling of recharge card, deposit collection/withdraw and other social services. In most of the cases he is providing his clients’ remit money to their doorstep so that they don’t need to come to his shop personally.

However, there are challenges.  “The biggest challenge I have been facing is cash limit management and lack of smooth telephone network during the transactions,” he shares.

His dedication to the BLB work, alongside his other businesses is truly inspiring to see. What’s more inspiring is that there are more than 100 other BLB agents like him who have been appointed as agents under Sakchyam’s partnership with various commercial banks. And Sakchyam team along with the commercial banks are keen to solve the challenges the BLB agents have on a day to day basis, so that they can reach more people and provide access to financial services to the  remote parts of the country.

Kathayat was recognized as one of the Best BLB Agent in the Far West Region during the BLB Workshop organized by Sakchyam in Dadeldhura.