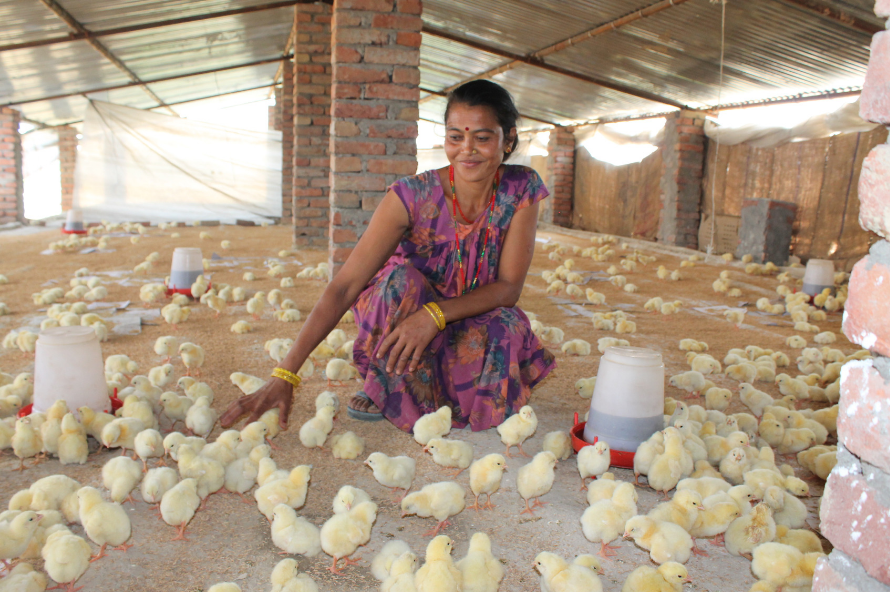 Anghni Tharu 37, is the sole breadwinner for her family. With her husband bedridden, Anghni has been providing for her three children and her husband. “I initially started with potato and menthol farming, but it was too risky and there was not much profit,” says the now confident entrepreneur.

Not to back away from an opportunity, Anghni decided to take a loan from United Youth Community (UNYC) and started pig farming. “Upon discussing with UNYC, pig farming seemed to be a lucarative business. So, initially I bought just one pig from the loan I received from UNYC, now I have 25 pigs,” Aghni says proudly. She sells one pig for NPR 4000 and has been able to build a permanent pigsty from the profits she has made.

But Anghi knew she could do more. “When UNYC announced the Sakchyam Business Loan, I knew I had to take advantage of it,” she remarks. So, about a year ago, she took NPR 80,000 loan from UNYC and started poultry farming as well. Why poultry farming? “It has good returns,” says the business-savvy Anghni, who now makes more than NPR 100,000 in profit annually from both her pig and poultry farming.

“The loans helped me set up my businesses but it takes a lot of hardwork and dedication to make it a successful one,” she says.

Being financially sound has had a positive impact on her entire family. She is not only able to take care of her family’s basic needs, but is also able to send her children to school. “That is my biggest achievement,” says the mother of two daughters and one son.

The Sakchyam-UNYC Partnership has brought 15,537 women, like Anghni, access to financial products and services to improve their livelihoods. UNYC has designed a new business loan with Sakchyam’s support to promote the establishment of women-led small and micro-enterprises (SMEs). The loan is paired with savings products and with skills training on piggeries, pigeon & poultry farming, goat rearing, bee keeping, vegetable farming and pickle making, so that the women are better equipped to be successful.