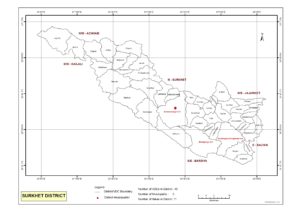 Surkhet is a commercial hub to remote districts like Dailekh, Kalikot, Jumla, Mugu, Jajarkot, and Salyan of Mid-Western region of Nepal and is accessible by road and air from other parts of the country.

The population of Surkhet comprises of a majority of about 31.62% Chhetris, 18.88% Magar, 18.29% Kami, 11.53% Brahmin followed by others, in terms of caste and ethnicity.[3] A key focus of Sakchyam Access to Finance programme is to increase the access to financial services and facilities for the rural poor of the district and particularly for women and other DAGs.