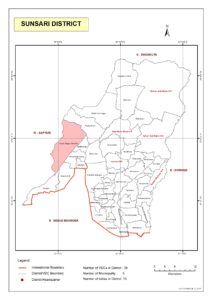 Sunsari is a district that lies in Province 1 of Nepal. The district with Inaruwa as its headquarter is located in the Terai plain of Eastern development region. The total area covered by the district is 1,257 sq. km., which is further divided into 49 VDCs, three municipalities and six electoral constituencies. The total number of households being 162,407, the district has a total population of 753,244 (Male 362,551 and Female 390,693) and a population density of 607.39 per sq. km.[1]

The major economic activities performed by the locals of this district are agriculture, industry and service. However, only 19.47% of the households report to have agriculture as their major source of income[2]. The main reason behind this is the growing popularity of migration and overseas employment.

The highest population of Sunsari is that of Tharu (11.98%), followed by Muslim (11.55%). The population of Sunsari further consists of 7.99% of Brahmin, 9.36% Chhetris, 2.20% Kami, 2% Magar followed by others, based on caste or ethnicity[4]. Caste based discriminations is the major problems of the district. Seasonal migration to India for employment is also an observed problem. A key focus of Sakchyam is to increase the access to financial services and facilities for the rural poor of the district, particularly for women and other DAGs. Sakchyam Access to Finance programme may also focus on climate and GESI related concerns such as solar technology, biogas and rice husk Gasifier, wood, bio-charcoal, bio-briquette, etc.