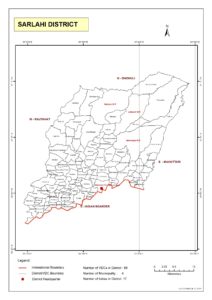 Sarlahi is a district that lies in the Janakpur Zone of Province 2 Nepal, with Malangwa as it headquarters. It is further divided into 98 VDCs, five municipalities and six Electoral Constituencies. The district having 132,803 households, has a total population of 769,729 (Male 389,756 and Female 379,973) and a population density of 610 kms.[1]

Agriculture, Industry and Service are the major activities performed by the residents of the district. However, only 22.92% of the households report to have agriculture as their major source of income[2].

The highest population of Sarlahi is that of Yadav (15.51%), followed by Muslims (7.93%). The population of Sarlahi further consists of 3.58% of Brahmin, 3.72% Chhetris, 1.99% Magar followed by others, based on caste or ethnicity. Gender based discriminations is the major problem of the district. Seasonal migration to India for employment is also an observed problem.

The main gender issues in the district are restricted movement of women, torture related to dowry, alleged witchcraft, child marriage, domestic violence and barring from education. Violence related to witchcraft occurred in the district as recently as 2010, though no more recent incidents have been reported.

A key focus of Sakchyam Access to Finance programme will be cultivation of cash crops such as sugarcane, tomato, potato, chilies, horticulture, and tropical fruits by enabling and enhancing the access to finance (value chain financing) to DAGs and poor people from the rural part of the district. Apart from this lands under the community and leasehold forest programmes can support cultivation of medicinal and aromatic plants to provide employment and income for DAGs and also support for production of Non-Timber Forest Products.