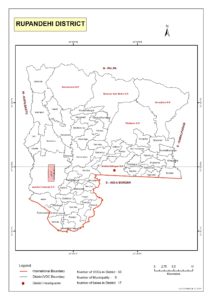 Rupandehi lies in Lumbini Zone in Province 5 of Nepal. Bhairahawa is the district headquarter. The district, with an area of 1,360 sq. km is divided into 69 VDCs and two municipalities. Rupandehi has 163,916 households with a total population of 880,196.[1]

Agriculture (including livestock and poultry), cottage industries and trading are the main economic activities of the district. 82.6% of the population reported agriculture as the major source of income.[2] Among the registered small and cottage industries, majority of the industries work in the production sector, followed by the service sector and then the tourism sector.

Rupandehi’s total population comprises of about 15.9% Brahmins, 10.7% Magar, 9.63% Tharu, 8.23% Muslim followed by many others, in terms of caste and ethnicity.[4] Women in Rupandehi are mostly confined to farming and household activities, and are less involved in major economic activities. This has led to practices like early marriage and dowry system. There is a lack of easy access to loan for women farmers. Subsidy to women to adopt new technologies hasn’t been introduced till date. Due to seasonal migration and involvement of women mostly in household activities, the area faces labour shortage in agriculture. Introduction of technologies that reduce the need of labour should be made accessible to women. A key aim of Sakchyam is to increase the access to financial services and products which also facilitate mechanisation of agriculture and facilities to empower women and other disadvantaged groups of the area.