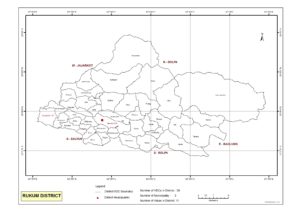 Agriculture (including livestock and poultry), cottage industries and trading are the main economic activities of the district. Paddy, wheat, maize, vegetables, spices, etc. the main agricultural products of the district. The district is famous for high quality seed production. Its rich forestry resources, around 60% of the area is covered by forest, also provides potential for herb collection and processing.

The district is served by twelve different branches of ‘A’ Class Commercial Banks and one branch of ‘B’ Class Development Bank. The population served per branch is 16,930 against the national average of 8,960[2]. This indicates the need to further expand the outreach of financial services and facilities to the unbanked population of the area. There is a demonstrable need to increase footprint of FIs in the inner areas of the district.

Agriculture is the main income source for majority of households (around 93%). If we analyse the use of credit products in Agriculture, only around 20% had agriculture credit out of which major sources of credit were relatives (68%), followed by women’s group (16%) and cooperatives (7.44%).[3]

To unleash the full potential of the agriculture sector, there is a need to increase access to credit and other financial products in the district.