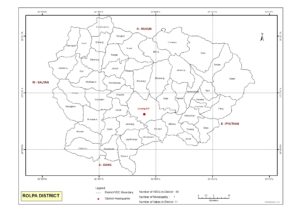 Agriculture (including livestock) and cottage industries are the main economic activities of the district. 95.21% of the households have agriculture as the main source of income.[2] However, due to limited employment opportunities in Rolpa, many young males travel abroad for employment opportunities, indicating the district receives significant remittance. The population of district headquarter, Libang is around 20,000 while that of Sulichaur is 60,000. Sulichaur is a major market point of the district where trading occurs at a big scale from entrepreneurs and businessmen across Rukum, Pyuthan, Salyan and Rolpa. Among the small and cottage industries, majority of the industries belong to the service sector, followed by tourism and the energy sector.

The district is served by ten different branches of ‘A’ Class Commercial Banks, and one branch of ‘B’ class Development Bank. The population served per branch is 21,251 against the national average of 8,960[3]. This indicates the need to further expand the outreach of financial services and facilities to the unbanked population of the area.

The population of Rolpa comprises of about 43.21% Magar, 33.8% Chhetris, 12.24% Kami, followed by smaller share of other groups, in terms of caste/ethnicity.[4] Rolpa is one of the worst hit districts by the decade long insurgency. Migration of young male population, domestic violence and household conflicts are quite common in the district.[5] Early marriage is an issue and data shows that almost 74 percent of girls in Rolpa get married as adolescents.[6] Although a third of all households in Rolpa are headed by women, they don’t own the house or the land in about 92% of households.[7] A key focus of Sakchyam is to increase the access to financial services and facilities for the rural poor of the district and particularly for women and other DAGs.