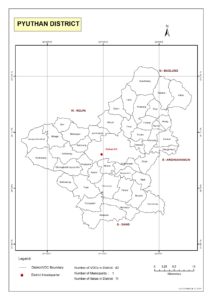 Pyuthan’s total population comprises of about 32.58% Magar, 24.95% Chhetris, 13.92% Kami, 9.86% Brahmin, followed by others, in terms of caste and ethnicity.[4] Lack of educational opportunities has ultimately resulted in less economic/employment opportunities for women in the district. Early marriage and other discrimination issues also have taken their toll on the health of young girls. A key aim of Sakchyam is to increase the access to financial services and facilities so as to empower women and other disadvantaged groups of the area.