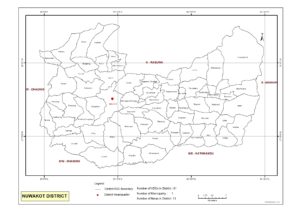 Nuwakot lies in Bagmati Zone of Province 3 of Nepal. The district with Bidur as its district headquarters falls into the Central development region and is further divided into 61 VDCs and one municipality. The district having 59,194 households, has a total population of 377,471 (Male 132,787 and Female 144,684) and a population density of 250 km2.[1]

Agriculture, Service and industry are the major activities performed by the residents in the district. 51.25% population is engaged into agricultural activity, 14.43% is engaged into salary earning occupations.

The district is served by 26 different branches of ‘A’ Class Commercial Banks, 11 different branches of ‘B’ Class Development Banks, 1 branch of ‘C’ Class Finance Companies. The population served per branch is 7,493 against the national average of 8,960[2]. This indicates the need to further expand the outreach of financial services and facilities to the unbanked population of the area.

The highest population of Nuwakot is that of Tamang (42.84%), followed by Brahmin (18.94%). The population of Nuwakot further consists of 12.60% Chhetris, 2.30% Magar followed by others, based on caste or ethnicity[3]. Gender based discrimination is the major problem of the district. Migration to overseas countries for employment is also an observed problem. A key focus of Sakchyam is to increase the access to financial services and facilities for the rural poor of the district, particularly for women and other DAGs. Sakchyam Access to Finance programme may also focus on value chain financing to the poor people from the rural part of the district and earthquake affected people. And also Sakchyam may provide support on value chain financing for commercial animal husbandry.