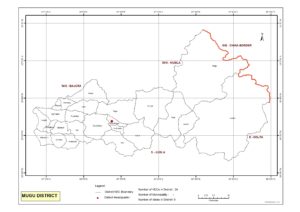 The topography of the district consists of high mountains and as such road access is very limited. Gamgadhi is not linked to the national road network and is connected to the neighbouring districts by trails.

Agriculture (including livestock) and cottage industries are the main economic activities of the district. Although agriculture forms the major source of income in 97.12% of the households, food security remains a serious concern till date.[2] Among the small and cottage industries, majority work in the service sector followed by the productive sector.

The district is served by six different branches of ‘A’ Class Commercial Banks. The population served per branch is 10,185 against the national average of 8,960[3]. This indicates the need to further expand the outreach of financial services and facilities to the unbanked population of the area.

The population of Mugu comprises of about 48.87% Chhetri, 15.35% Thakuri, 9.47% Kami, 7.87% Tamang followed by smaller shares of other groups, in terms of caste/ethnicity.[4] Gender and caste based discrimination are persistent in Mugu. Women are discriminated in many different forms, one of them being ‘Chhaupadi’. Child marriage is also a common issue. About 72 percent of girls and women in Mugu are married in their adolescence.[5] Early marriage and gender based violence, often linked with alcoholism, are common sight in the district. A key focus of Sakchyam is to increase the access to financial services and facilities for the rural poor of the district and particularly for women and other DAGs.