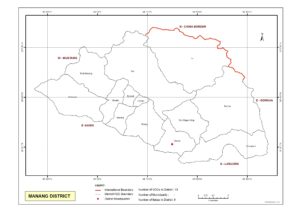 Agriculture, livestock, cottage industries, tourism and service industries are the main economic activities of the district. Agriculture is the major source of income in about 65.76% of the households. Most of the small and cottage industries work in the tourism sector. Flourishing tourism industry is one of the reasons for falling poverty level in Manang.

The district is served by four different branches of ‘A’ Class Commercial Banks, two branches of ‘B’ Class Development Bank. The population served per branch is 1,069 against the national average of 8,960[2]. This indicates the need to further expand the outreach of financial services and facilities to the unbanked population of the area.

Along with the Marwaris who have migrated from India to Nepal in large numbers, the Manangies are the best known traders of Nepal. Ever since the area was opened to outsiders in the late 1970s, many have switched from the traditional agriculture to hotel business.

A key focus of Sakchyam Access to Finance programme will be to increase the access to financial services and facilities to the poor people from the rural parts of the districts via value chain financing.