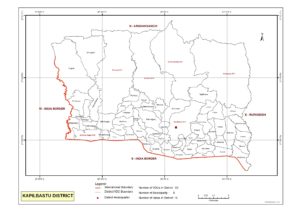 Kapilbastu lies in Lumbini Zone in Province 5 of Nepal. Taulihawa is the district headquarter. The district, with an area of 1738 sq. km is divided into 77 VDCs and 1 municipality. Kapilbastu has 91,321 households with a total population of 571,936.[1]

Agriculture (including livestock and poultry) cottage industries and trading are the main economic activities of the district. 88.46% of the population reported agriculture as the major source of income.[2]

The population of Kapilbastu consists of about 18.16% Muslim, 12.26% Tharu, 10.14% Yadav, 8.54% Brahmin, followed by many others, in terms of caste/ethnicity.[4] Women in the district continue to face unequal power relations, particularly in Madhesi and Muslim communities. Nearly three quarters of the girls get married in their adolescence.[5] Caste based discrimination still exists in the district which is evident from the reality that Dalits are still not allowed to share public spaces with the non-Dalits. Women have received limited access to the products/services offered by banks and financial institutions in Kapilbastu. Sakchyam’s key aim in Kapilbastu is to increase the access to financial services and facilities so as to empower women and other disadvantaged groups of the area.