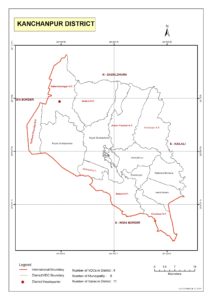 Agriculture (including livestock and poultry), cottage industries and trading are the main economic activities of the district. 75.65% of the households stated that agriculture forms their major source of income.[2] Among the registered small and cottage industries, majority work in the service sector followed by the productive sector.

The population of Kanchanpur consists of 28.93 percent Chhetris, 25.68 percent Tharus, 15.96 percent Brahmins, 7.72 percent Kamis followed by others, in terms of caste/ethnicity.[4] Rana Tharu, a sub group of Tharu, has different language, dress and religious practices and belong to the Far Western Region of Nepal. Kanchanpur is not free from women discrimination; women are less involved in economic activities and have less access to financial services. A key focus of Sakchyam is to increase the access to financial services and facilities that would ultimately help reduce the discriminatory practices towards women and DAGs.