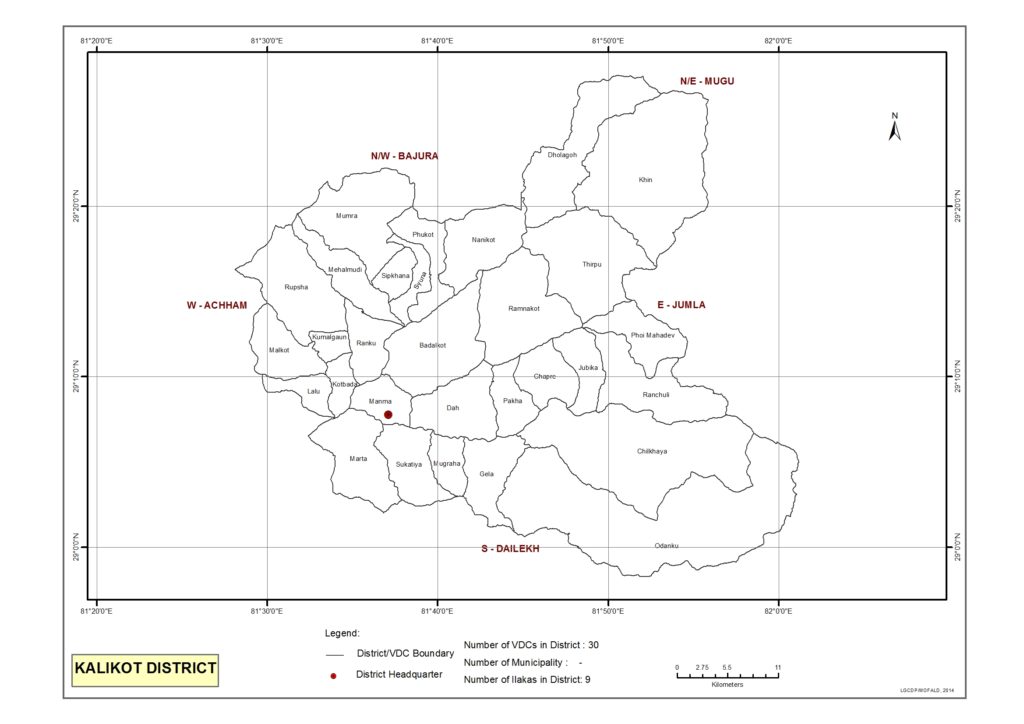 Kalikot lies in Karnali Zone in Province 6 of Nepal. Manma is the district headquarter. The district, with an area of 1,741 sq. km is divided into 30 VDCs. Kalikot has 23,013 households with a total population of 136,948 (Male 68,833 & Female 68,115).[1] The Karnali Highway connects Kalikot with other parts of the country; however the condition of the Karnali highway is very poor.

The district is served by eleven different branches of ‘A’ Class Commercial Banks. The population served per branch is 13,814 against the national average of 8,960[2]. This indicates the need to further expand the outreach of financial services and facilities to the unbanked population of the area.

The population of Kalikot comprises of 28.83% Chhetris, 25.08% Thakuri, 17.66% Kami, 17.11% Brahmin followed by smaller share of other groups, based on caste/ethnicity.[3] Caste and gender based discrimination is very widespread in Kalikot. Even today, in some parts of the districts, Dalits aren’t allowed to enter the houses of people of other castes. Women are discriminated in many aspects, ‘Chhaupadi’ being one of them. Women do not own either land or houses in 94% of the total households.[4] Preference to boy over girl child makes women bear more children, thus deteriorating their health conditions gradually. Child marriage and polygamy are still common in some parts/communities of Kalikot.[5]

A key focus of Sakchyam is to increase the access to financial services and facilities for the rural poor of the district and particularly for women and other DAGs.