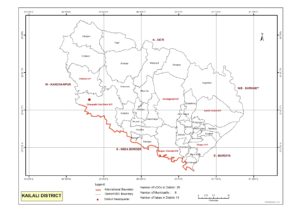 The district is well served by road network. Kailali is the gateway to various hilly districts of the region such as Dadeldhura, Baitadi, Accham, etc. Due to its strategic location, the district can be considered as regional hub.

Agriculture (including livestock and poultry), food processing industries, service industries such as transportation, hotels and trading are the main economic activities of the district. Paddy, wheat, vegetables, fruits and potatoes are the main agricultural products of the district. As Kailali district and the surrounding areas are considered rice basket of the region, the district has many large and well known food processing industries in the area. Its rich forestry resources, around 64% of the area is covered by forest, also provides potential for herb collection and processing.

Agriculture is one of the top activities as stated by households. If we analyse the use of credit products in Agriculture, only around 22% had agriculture credit out of which major sources of credit were relatives (33%), followed by women’s group (23%) and farmer’s groups (4%).[3] Despite the presence of large number of FIs in the district, informal sector still are the dominant suppliers of the credit. This may be one of the limiting factors for the large scale commercialisation of agriculture sector. AFP Programme will work closely with FIs to increase the range of suitable financial products as well as to streamline process which will facilitate use of agriculture credit.

Women suffer from gender based discrimination in education, nutrition, social and cultural norms. Women are less likely to be involved in economic activities outside the home and are marginalised in major decision making. Caste based discrimination is still prevalent in district. The district also has a number of vulnerable groups such as Tharu, Raji and Badi.