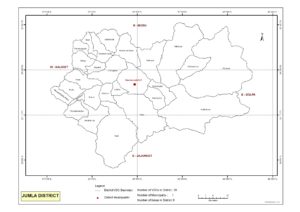 Agriculture (including livestock and poultry), cottage industries and trading are the main economic activities of the district. Agriculture forms the major source of income for about 94.56 percent of households.[2] Among the small and cottage industries registered, majority work in the service and agriculture and wildlife sector.

The district is served by eighteen different branches of ‘A’ Class Commercial Banks, and two branches of ‘B’ Class Development Banks. The population served per branch is 5,990 against the national average of 8,960[3]. This indicates the need to further expand the outreach of financial services and facilities to the unbanked population of the area.

The population of Jumla comprises of about 60.24 percent Chhetris, 10.95 percent Brahmin, 7.4 percent Thakuri, followed by smaller shares of other groups, in terms of caste/ethnicity.[4] Bonded labour, referred as Lagi, Haliya or Badikae, is still practised in Jumla. Chhaupadi is practised in Sinja valley and surrounding areas. Women literacy rate stands at 41 percent while the overall literacy rate is 55 percent[5], indicating women are still behind in educational opportunities. A key focus of Sakchyam is to increase the access to financial services and facilities for the rural poor of the district and particularly for women and other DAGs.