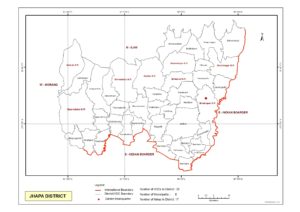 Jhapa falls in the Terai region of Province 1 of Nepal. Chandragadi is the district headquarters. The total area of the district is 1,606 sq. kms, which is further divided into 37 VDCs and eight municipalities. Jhapa has 184,552 households with a total population of 812,650 (Male 385,096and Female 427,554)[1]. The average household size is 4.18 whereas, the population density is 506.01 sq. km. The literacy rate in the district is 77.7%, which is the highest literacy rate in the country after Kathmandu, Kaski and Chitwan districts.

Agriculture and industries are the major source of economic activities performed by the households residing in the district. Having said that, only 28.6% of the households are engaged in agriculture[2]. The main reason behind this is the growing popularity of migration and overseas employment. Major agriculture productions of this district are cereal crops (paddy, wheat and maize), cash crops, high value crops and jute farming as seasonal and non-seasonal as well as horticulture.

The district covers 1,606 km2 (620 sq mi). The 2011 census counted 812,650 populations. The average literacy rate is about 67.14% on which 58.8% female and 75.62% male are literate. This district has multi ethnic composition; majorities are Brahamin, Chetri, Rajbanshi, Limbu, Rai, Tamang, Kami, Damai etc. Common communicating language is Nepali (57.70%) followed by Rajbansi (13.40%), Limbu (5.49%), Santhali (3.59%) and Maithali (3.46%). Poverty and some caste based discriminations are the major problems of the district. Seasonal migration to overseas countries have created additional responsibilities for women and has increased their workload.

A key focus of Sakchyam is to increase the access to financial services and facilities for the rural poor of the district, particularly for women and other DAGs. Sakchyam Access to Finance programme will also focus on climate and GESI related concerns such as making available access to credit to support acquiring solar home systems, micro-hydro, biogas, improved cooking stoves, waste management technologies, climate resilient pre-fabricated houses, and financing to promote micro-enterprises, commercialise agriculture/livestock and agriculture value chains to support the poor’s higher productivity and income level etc.