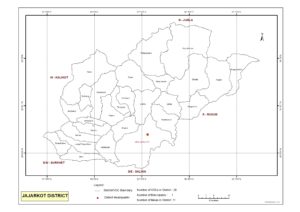 Jajarkot is connected to the other districts only by road network. However, due to poor road conditions, there are blockages seen, especially during monsoon.

The district is served by five different branches of ‘A’ Class Commercial Banks, and one branch of ‘B’ Class Development Bank. The population served per branch is 31,580 against the national average of 8,960[3]. This indicates the need to further expand the outreach of financial services and facilities to the unbanked population of the area.

The population of Jajarkot comprises mostly of Chhetris (55%), Dalits (27%), Brahmins and Janajatis.[4] Gender and caste based discrimination have decreased than in the past, however not entirely eliminated. Domestic violence is highly prevalent in the district and one of the major factors behind it has been intake of alcohol.[5] Child marriage is another huge issue. Among those aged 10 and older, 3% of men and 12% of women first married before they were 15, and 48% of men and 67% of women first married between the ages 15 and 19.[6] Households are also affected by bonded labour, which is not limited only to a particular community.

A key aim of the Sakchyam Access to Finance Programme is to increase the access to financial services and facilities by implementing value chain financing activities that would help to improve the economic status of rural poor, especially women and DAGs.