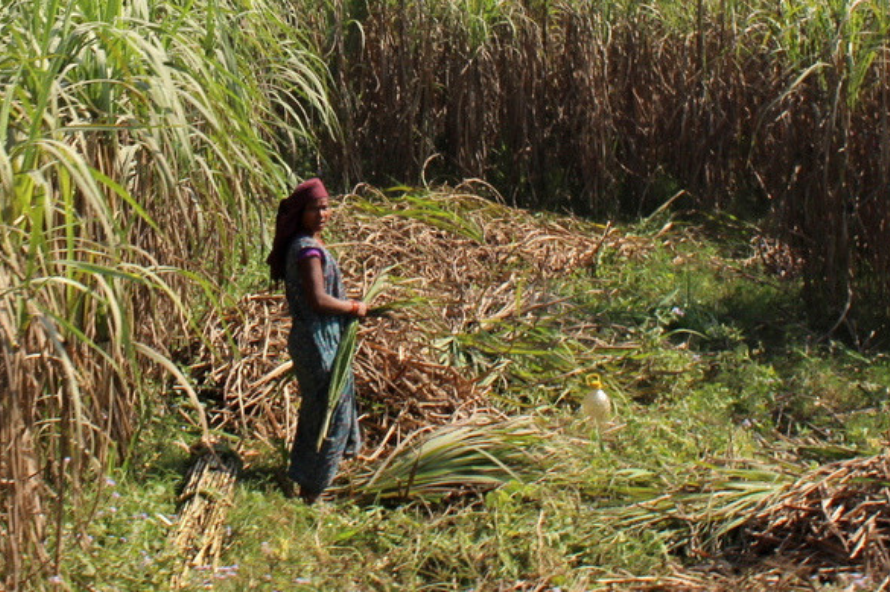 The Challenges: Every year, the farmers involved in sugarcane farming go through a recurring issue i.e. delay in payment for their produce. Farmers, who wait around a year for the harvest, further need to wait months to year more to get the payment for their product. Facing such cash crunch, many farmers, especially the smallholder farmers with limited sources of income, are forced to sell their produce to local sugarcane crushers or middlemen who would offer cash instantly but the rate per quintal would be much lower compared to what the ‘sugar mill’ would offer. Their other option is to rely on the loans provided by local money lenders and financial institutions who are known to charge exorbitant interest rates reaching up to 36% and more.

The scenario wasn’t any different to 5,000+ farmers associated with Mahakali Sugar Industries situated at Bellauri of Kanchanpur district. The late payment from the mill often meant the farmers either would have to sell their produce to the ‘middle men’ or would resort to local financial institutions (FIs) and money lenders to meet their financial needs. With such ‘alternatives’ that only pushed them further into debt, farmers in Bellauri were in need of a financial solution which they could afford both in terms of pricing of the services and terms attached. Lower interest rates, collateral free which also mean less hassle from lengthy documentation that come attached with loan application and repayment that is tied up to payment from the mill were aspects that were critically important to them.

Proposed Solution: A successful intervention in this case would need a specific focus on a number of factors i.e. willingness of the sugar mill to work in the benefits of its farmers and have a long-term vision of how routing such benefits to farmers could help it eventually, a willing bank not only to offer the innovative financial product and service but also readiness to accept the ‘invoice’ issued by sugar mill and then to design the appropriate financial product and its effective implementation.

Sakchyam’s proposed solution was to bring together an interested bank and a suitable sugarcane mill together to offer an invoice discounting product to benefit all involved. It would provide the clients – smallholder sugarcane farmers – with a way to access cash immediately. The crushing mill would enjoy an advantage over other competing mills by offering a unique financial product for its clients. And the product partnership would allow the bank to access a new segment of clientele, adding not just to its client diversity but also allowing itself new business by improving its presence in a remote region of the country. Moreover, if the partnership were to work it would specifically benefit poor members of the indigenous Tharu community who make up the majority of the impoverished population of Bellauri and surrounding areas.

Rounds of discussions with bank management, mill owners and interactions with farmers led to the concept of a new product to be introduced – Sakchyam Sana Kisan Ukhu Karja – through a tri-partite agreement amongst Sakchyam, Bank of Kathmandu (BOK) and Mahakali Sugar Mill.

The Product – Sakchyam Sana Kisan Ukhu Karja and its Development: After identification of a clear need for a financial product, which could prove one of its kind in Nepalese financial market, a round of interactions and meetings were initiated between BOK, Mahakali Sugar Industries and the UKaid Sakchyam programme. Input from the Bank’s Dhangadi branch staff was also taken into consideration – they had faith in the company the bank was partnering with. Once the partners were on board, all three institutions participated in the product development. Interaction programs were carried out with local sugarcane farmers with the participation of the bank’s top level management and the owner of Mahakali Sugar Industries to get input of various stakeholders. These discussions and understanding generated lead to a following modality of work:

When the sugarcane farmer’s produce is ready for crushing, he/she takes it to the mill – in this case Mahakali Sugar Industries Limited, one of the partner institutions in the project. The mill weighs the sugarcane in its premises, tests its quality and takes in the sugarcane from the farmer, providing him/her with an accepted invoice stating the total value of the product. The price for the sugarcane, per quintal is decided at the beginning of the crushing season and stays the same throughout the season. 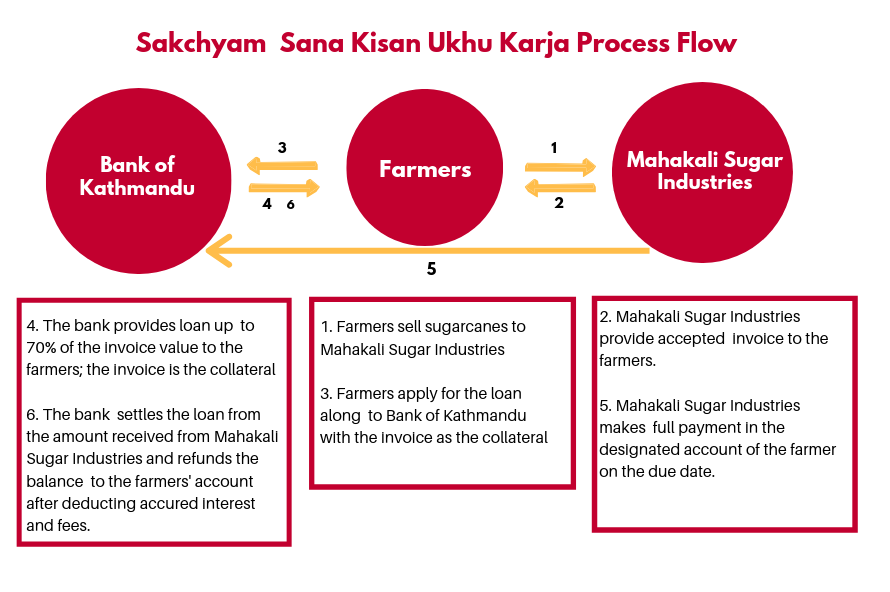 The farmer then takes the invoice from the mill to the bank, in this case BOK, where he/she is eligible to apply for a loan of up to 75% of the amount stated on the invoice, using the same invoice as collateral. After a few months, when the sugar mill is able to pay back the farmer, it deposits the amount it owes into the farmer’s bank account. The bank takes the loan amount it is owed, along with the competitive interest it has charged, and leaves the remaining amount in the farmers’ account for him/her to withdraw or use as they see fit.

Success in Numbers: Within months of the launch of Sakchyam Sana Kisan Ukhu Karja, 299 farmers signed up for it and total loan disbursal of NPR 27.37million. Bank catered to loan size as small as NPR 11,000 while the largest loan size was NPR 150,000. Catering to such a large number of farmers for such loan sizes was a first of its kind experience for the bank. Also, it’s worth a mention that the product was being offered from the Dhangadi branch of the bank, which is approximately 30KM away from the sugar mill accessible through a gravel road which gets worse during the sugarcane crushing season.

Realizing the potential of the market and encouraged by early success of the product, the Bank decided to open a branch in the Bellauri itself and with Sakchyam’s support it opened a full-fledged bank branch at Bellauri on December 2015. This BOK branch was the first private commercial bank branch in that area. The branch immediately went onto become one of the best performing branch for the bank achieving milestone figures such as opening maximum number of saving accounts for the bank in a period as well as reaching the break-even point (BEP) within first six months of its operation.

After the completion of three crushing seasons, the product has benefited more than 1200 sugarcane farmers leading to loan disbursal of NPR 87.5 million with 100% repayment rate.

Lessons Learnt: From product innovations to the way partnerships could work, this project has shed valuable insights to Sakchyam as well to the practitioners like banks. Some of the key lessons learnt include

Commercial Banks in Nepal have been endeavouring to expand their presence in the Small and Medium Enterprise (SME) lending space[1]....(more...)

Till 2017, the irregular and uncertain supply of electricity was a major problem for households and enterprises in Nepal. According...(more...)

After completing two years of the partnership titled ‘Retail Banking and Branchless Banking in Manang, Rukum and Achham’, Prabhu Bank...(more...)

Bringing a financial institution and a sugar mill together to provide financial relief for sugarcane farmers in rural western Nepal(more...)