Most rural and semi-urban areas in the mid and far-western districts of Nepal have small populations scattered over regions that are difficult to reach. The economic landscape of these areas is quite basic – markets consist of small retail outlets and eateries. Most of the youth work abroad as migrant labours. The main source of income is either agriculture or remittance. Also, presence of Financial Institutions (FIs) is limited to district headquarters.

With UKaid Sakchyam’s support, Bank of Kathmandu (BoK) has established 6 physical branches in Belauri of Kanchanpur, Bhaluwang of Dang, Bijuwar of Pyuthan, Devdaha of Rupandehi, Lamki of Kailali and Rajapur of Bardiya district. Most of these locations have been recently upgraded to municipalities with a potential to develop as commercial hubs. BOK has also leveraged its experience of working with local FIs, cooperatives in the past to ensure the people living in remote locations have access to funds to invest in productive areas such as livestock farming, vegetable farming and small-scale entrepreneurship through such FIs/cooperatives.

All of the 6 branches opened in mostly agro-dominant economic locations, these branches reached break even within two years of opening the branches (Branch in Bellauri reached BEP witin first 6 months).

The new bank branches cater to the various banking needs of the local population – a majority of whom belong to the Tharu and other disadvantaged groups. Women and farmers will have access to a number of segment-specific financial products that the bank will offer; agro business firms, Small and Medium Enterprises (SMEs) and Micro, Small and Medium Enterprises (MSMEs) will be able to benefit from existing and new financial products that will be designed to meet specific and seasonal needs; general households will have a trusted financial institution to receive and route their remittance, along with various saving options.

Under this partnership, BOK has disbursed NPR 1.6 billion in loans, collected NPR 898 million in savings and expanded outreach to 23,884 customers. 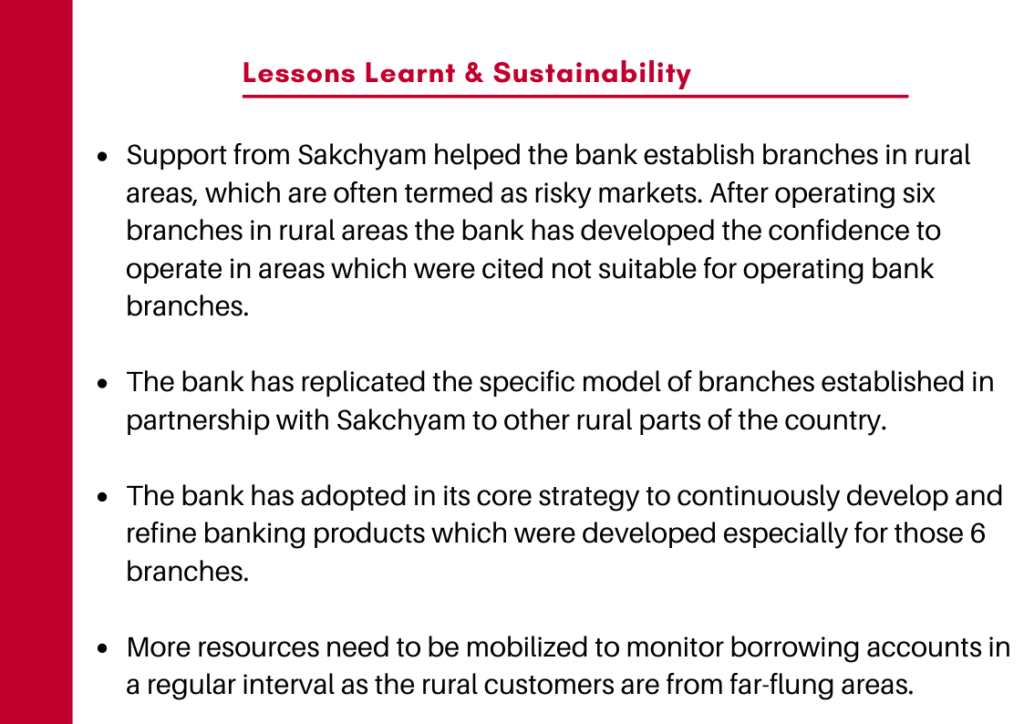