Improving Livelihoods Situations of Disadvantaged Communities Through Access to Finance

One of the major components of the UKaid Sakchyam Access to Finance Programme (Sakchyam) is to work with Nepal’s Microfinance Institutions (MFIs) to make financial products and services affordable, available and accessible to the disadvantaged populations of the country. Millions of Nepalese still lack basic access to finance, especially in Karnali and Province 5 & 7 due to difficult topography and lack of physical infrastructure. In the face of these challenges, Sakchyam has worked closely with MFIs to resolve the problem of lack of formal financial institutions and financial inclusion – focusing on areas of branch expansion, product and service development, alternative delivery channels, capacity building and financial literacy. Most interventions are set in priority districts where better financial services have the potential to empower rural communities by making them financially independent.

The problem of topography and lack of institutional infrastructure extends beyond the difficulty of providing financial services – it means people are unaware of the possibilities of these services in the first place. In Rolpa, most young men opt for foreign employment and 74 percent of girls get married as adolescents making them financially reliant on their families.[1] In families where agriculture is the main source of income (about 93 percent households) in Salyan, only about 20 percent households had agricultural credit. This means that there are limited financial services available, in which most do not cater for the needs of the rural population. Furthermore, in all of the districts VLBS aimed to open its branches, the population served per branch is much higher than the national average of 8,960, highlighting the need for more branches in these areas.[2]

Sakchyam partnered with Vijaya Laghubitta Bittiya Sanstha (VLBS) in March 15, 2015 to open five new branches in Dang, Salyan, Pyuthan, Rolpa and Rukum districts. The project was undertaken to provide entrepreneurship training prior to giving out loans and implement financial literacy initiatives by adopting Mobile Technology and Community Radio Programmes making it one of the first MFIs to do so. The initial aim was to reach about 4,000 beneficiaries with the financial product and services.

To effectively address the existing problems, the Sakchyam and VLBS partnership intended to both financially educate the population of these regions (mainly poor and disadvantaged people – particularly the Dalits, Janajati, Women and other Minorities) and then provide the services necessary to unleash their full potential. To make the people financially literate, mobile and FM radio programmes were used. VLBS also employed the ‘Be with your client’ approach which used SMS and voice messages as a method to engage with clients. Through this partnership, for the very first time in Nepal, Interactive Voice Response (IVR) technology was used for financial literacy. Additionally, to improve the connectivity of branches, an enhanced MIS system was used to link branches to their head office.

Sakchyam’s partnership with VLBS has been successful on various fronts. Up to 2017, the partnership enabled the opening of eight new VLBS branches, three more than targeted. From December 2017 to March 2018, the total number of loans disbursed has increased from GBP 50K to GBP 54K while collecting GBP 36K in deposits. In the last few months before completion of the project with Sakchyam involvement, in February 2018, VLBS has been able to achieve the targets it had set at the beginning of the project. 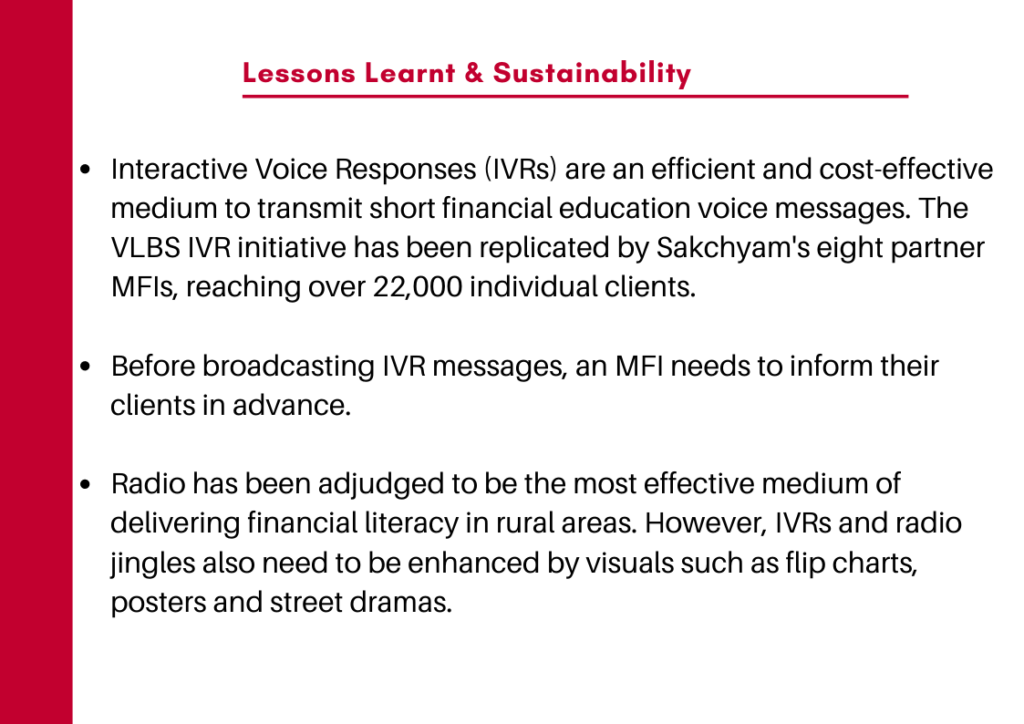