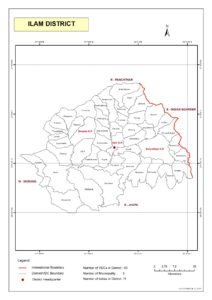 Ilam is today one of the developed hilly districts in Nepal. Ilam tea is very famous and is exported to many parts of Europe. The main source of income in this district are tea, cardamom, milk, ginger, potato, Orlon, and broom grass (Amriso) produced on a large scale. Thus, a large part of the population is involved in Agriculture.

This district has the highest population of the Rai (23.76%) followed by Limbu (15.72%). Brahmin in the third position (13.91%) is followed by Chhetri (13.69%), Tamang (6.95%), Magar (5.19%), Kami, Gurung, Sherpa, Damai, Sunuwar, Lepcha fall under others, in terms of caste/ethnicity. Among total population, 5.53% are Dalits and 65.17% are indigenous nationalities in Ilam district[4]. Lepcha is categorized an endangered indigenous nationality of Nepal. Lepcha covers 0.97 percent of total population of the district. The traditional patriarchal structure of the society and structural discrimination against women contribute to reduce their social and economic status in Ilam district.

A key focus of Sakchyam is to increase the access to financial services and facilities for the rural poor of the district, particularly for women and other DAGs. Sakchyam may also set as a priority for this district creating linkages between financial institutions and other non-financial institutions (such solar power equipment outlet, agribusinesses, warehouses/collection centres, etc.) to provide access to finance for potential renewable/rural energy sources and associated technologies based on climatic, geographical & socio-economic variations and address them as to support GESI beneficiaries.