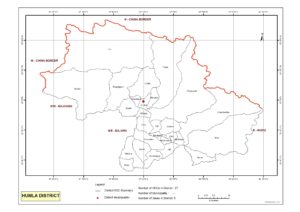 The topography of the district consists of high mountains and as such road access is very limited. Simikot is not linked to the national road network and is connected to the neighbouring districts by foot trails and air transportation.

The district is served by five different branches of ‘A’ Class Commercial Banks. The population served per branch is 11,234 against the national average of 8,960[3]. This indicates the need to further expand the outreach of financial services and facilities to the unbanked population of the area.

Humla’s total population comprises of about 38.7% Chhetri, 19.64% Thakuris, 13.45% Tamang, 9.71 % Kamis followed by others, in terms of caste and ethnicity.[4] Although discriminatory practices have been reduced in Humla after the decade-long insurgency, the change has not been significant. Women and Dalits are visible in school management and other district level committees, however, their representation is more symbolic than influential. Female literacy rate stands at just 4.8%[5], which clearly indicates that women lack the access to education facilities. As of 2013, 1,423 freed Haliya families have been registered in the district, of which 162 have been issued identity cards needed to receive rehabilitation support.[6]

A major focus of Sakchyam is to help the financial institutions mainstream GESI principles. The programme will also attempt to increase access to financial services and products to women and other disadvantaged groups via innovative value chain financing tools in a manner that could improve their livelihoods and self-dependence.