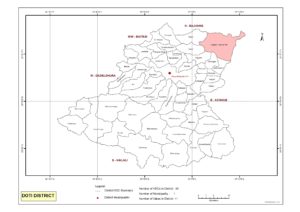 Agriculture (including livestock and poultry) and cottage industries are the main economic activities of the district. Agriculture is the main source of income in about 92.51% of the households.[2]

The population of Doti comprises of about 57.67 percent Chhetri, 12.10 percent Kami, 8.04 percent Brahmin, 4.55 percent Damai followed by others, in terms of caste/ethnicity.[4] Nepali is the most widely spoken language while languages like Magar and Tamang are also practised. Gender based discrimination is highly prevalent in Doti. Women suffer from gender-based violence and domestic violence, gender-based discrimination in education, household chores, nutrition as well as various social and cultural norms.[5] Women do not own either land or house in about 97% of the households; they are less involved in economic activities than men and mostly confined to domestic work and farming.[6] Discrimination to women also occurs in the form of ‘Chhaupadi’. In addition, domestic violence linked with excess alcohol consumption also exists in Doti.

A major focus of Sakchyam in Doti is to help the financial institutions mainstream GESI principles. It will also attempt to increase access to financial services and products to women and other disadvantaged groups via innovative value chain financing tools in a manner that could improve their livelihoods and self-dependence.