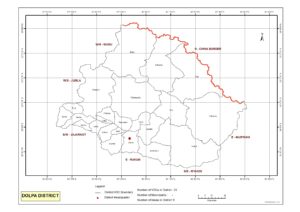 Dolpa lies in Karnali Zone in Province 6 of Nepal. Dunai is the district headquarter. The district, with an area of 7,889 sq. km, is the largest district of Nepal in terms of size. It is divided into 23 VDCs and has no municipalities. Dolpa has 7,488 households with a total population of 36,700 (Male 18,238 & Female 18,462).[1] Although Dolpa covers a large area, due to less population residing in the area, the population density is just 4.65/sq.km. Dolpa is inaccessible by road network; Dunai can only be reached by foot or air transportation. Dunai is connected via flights from Nepalgunj and Surkhet.

Agriculture, livestock, cottage industries are the main economic activities of the district. Agriculture forms the major source of income in about 97.25% of the households. Among the small and cottage industries registered, majority work in the service sector, followed by the agriculture and wildlife.

The district is served by five different branches of ‘A’ Class Commercial Banks. The population served per branch is 8,095 against the national average of 8,960[2]. This indicates the need to further expand the outreach of financial services and facilities to the unbanked population of the area.

The population of Dolpa is primarily comprised of Chhetris (43.8%), Gurung (22.62%) followed by Magars (13.15%).[3]  About 5.05 percent of the population belongs to the ancient ‘Bonpo’ religion. Caste-based discrimination is still prevalent in most of the communities in Dolpa. Although the situation in the district headquarters has been improving, Dalits aren’t yet allowed to share space with the people of other castes and face difficulty in using common wells, taps or other water resources freely.

A key focus of Sakchyam Access to Finance programme would be to focus on value chain financing of commercial animal husbandry that would help to improve the access to financial services and facilities in the area.