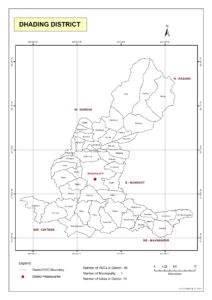 The district has poor development infrastructures like roads, electricity, and others.  It is commonly observed that large percentage of the youth populations are unemployed and are going for foreign employment nowadays due to the lack of proper infrastructure.[2]

Among the households, those engaged in agricultural activities in this district covers 41.4% of the total households[3].  The district is provoked to have a huge potential market for vegetable farming as it is situated at the mid-way of Kathmandu, Pokhara and Nawalparasi . The district also collects export tax and resource utilization tax from stone mines and sand mines. Remaining occupations of the households are business, service, wage labour and others.

This district has the highest population of the Tamang (22.09%) followed by Brahmin (14.98%) and Chhetri in the third position (14.72%). The population of Dhading further consists of Magar (8.52%), Kami (4.18%), Gurung (5.54%), Sherpa (0.02%), followed by others, in terms of caste/ethnicity[5]. The traditional orthodox society and structural discrimination against women contribute to reduce their social and economic status in Dhading district. The district also experiences some instances of Caste based discrimination. A key focus of Sakchyam is to increase the access to financial services and facilities for the rural poor of the district, particularly for women and other DAGs. Sakchyam Access to Finance programme may also focus on value chain financing to the poor people from the rural part of the district and earthquake affected people. And also Sakchyam may provide support on value chain financing for commercial animal husbandry.