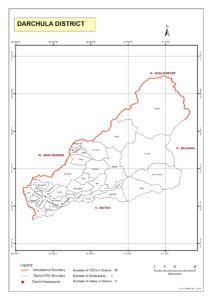 The population of Darchula consists of 63.55% Chhetris, 16.71% Brahmin, 5.27% Kami, 4.85% Thakuri followed by others, based on caste or ethnicity.[3] Deep rooted poverty and some caste based discrimination are the major problems of the district. Seasonal male migration to India has created additional responsibilities for women and has increased their workload. A key focus of Sakchyam is to increase the access to financial services and facilities for the rural poor of the district, particularly for women and other disadvantaged groups (DAGs).