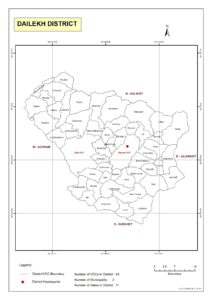 The district is served by sixteen different branches of ‘A’ Class Commercial Banks. The population served per branch is 17,864 against the national average of 8,960[2]. This indicates the need to further expand the outreach of financial services and facilities to the unbanked population of the area.

A key aim of Sakchyam Access to Finance programme would be to increase the access of financial facilities and services to the rural poor and DAGs. This would be possible via implementation of value chain financing activities.