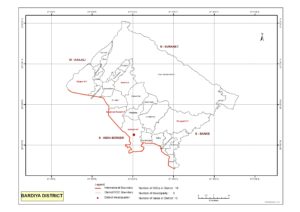 Agriculture (including livestock/poultry), cottage industries and trading are the main economic activities of the district.   84.29% of the households stated agriculture as the major source of income. Among the small and cottage industries, majority belong to the service and production category while there exists none on construction, minerals and energy.

The district is served by twenty three different branches of ‘A’ Class Commercial Bank, and seventeen different branches of ‘B’ Class Development Banks. The population served per branch is 11,563 against the national average of 8,960[2]. This indicates the need to further expand the outreach of financial services and facilities to the unbanked population of the area.

Bardiya’s total population comprises of about 53 percent Tharus, 11.45 percent Chhetris, 8.72 percent Brahmins followed by others, in terms of caste and ethnicity.[3] Among them, indigenous ‘Tharu’ community though comprising of the majority, are mostly landless and very poor. Discrimination and violence against women is common in all communities in Bardiya. A key aim of Sakchyam is to improve the access of financial services and facilities of the households of the area, giving special emphasis to rural poor, DAGs and ‘Mukta Kamaiya.’

The programme is supporting Machhapuchhre Bank and Sanima Bank to deploy Dedicated ARMs to increase financial services to the rural poor.