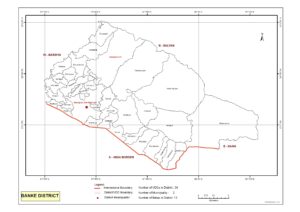 Agriculture (including livestock/ poultry), riverbed farming, cottage industries, business and trading are the main economic activities of the district.[2]  Among the registered small and cottage industries, majority work in the production sector, followed by the service sector, indicating production and service are the two major areas of employment in Banke.

Banke’s total population comprises of about 18.9% Muslim, 15.65% Tharu, 14.76% Chhetris followed by others, in terms of caste and ethnicity[4].  Muslim religious groups, Yadav, Tharu and other Hill and Terai Dalits are the key disadvantaged groups in Banke. Many Muslim girls are not sent to schools that do not respect religious principles. Lack of educational opportunities results in a subsequent lack of employment opportunities, directly affecting their future economic independence. Domestic violence is quite common and is often linked with alcohol consumption. Women are less involved in economic activities than men and are mostly confined to domestic work and farming. They are also deprived of credit facilities.

A key aim of Sakchyam in Banke is to increase financial access and promote value chain financing that could help to generate local employment opportunities, especially for the Muslim and Tharu communities which would ultimately help to minimize gender and caste based discrimination in the area.

The programme is supporting Machhapuchhre Bank and Sanima Bank to deploy Dedicated ARMs to increase financial services to the rural poor.