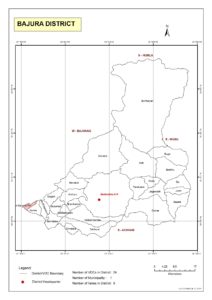 The only road network that connects the district to the rest of the region is the 62 KM Sanfe-Martadi road, which is frequently blocked during monsoon season due to landslides.

Agriculture (including livestock/poultry), cottage industries and trading are the main economic activities of the district. Wheat, paddy, buckwheat and potatoes are the main agriculture products of the district. Its rich forestry resource, around 43% of the total area is covered by forest, also provides potential for herb collection and processing.

The district is served by seven different branches of ‘A’ Class Commercial Banks and one branch of ‘B’ class development bank. The population served per branch is 18,586 against the national average of 8,960[2]. This indicates the need to further expand the outreach of financial services and facilities to the unbanked population of the area.

Agriculture is the main income source of majority of households (around 81% of the households). If we analyse the use of credit products in Agriculture, only around 27% had agriculture credit out of which others (33%) followed by relatives (26%) and cooperatives (14%) were the major sources of credit.[3]

Women suffer from gender based discrimination in education, nutrition, social and cultural norms. Disseminating practices such as Chaupadi (women and girls spend their menstrual days in the nearby shed and not allowed to enter their own home) are still prevalent. Women are less likely to be involved in economic activities outside home and are marginalised in major decision making. Caste based discrimination is still prevalent in district. The district also has a number of vulnerable groups such as former Haliyas (bonded labours).