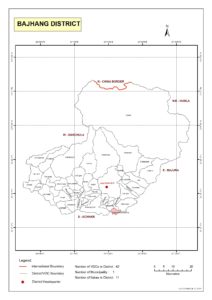 Agriculture (including livestock and poultry), cottage industries and trading are the main economic activities of the district. Besides, it is estimated that around 18,000 locals every year get involved in the collection and sale of a well-known herb, Yarsagumba.[2] Bajhang is a part of the Great Himalayan Trail (GHT)-one of the highest and longest walking trail in the world. The district is also famous for Khaptad National Park, Surma Sarobar Lake, Mt. Saipal and Tapoban. Bajhang thus has a tremendous tourism potential and 43 tourism focused small and cottage industries are registered in the district.

The district is served by fourteen different branches of ‘A’ Class Commercial Banks, and one branch of ‘B’ class Development Bank. The population served per branch is 14,211 against the national average of 8,960[3]. This indicates the need to further expand the outreach of financial services and facilities to the unbanked population of the area.

Bajhang’s total population comprises of about 66.54 percent Chhetri, 16 percent Dalits, 10.20 percent Brahmin, 7.33 percent Kamis, followed by others, in terms of caste and ethnicity.[4] The district faces multiple issues related to GESI. Women suffer from gender-based violence, domestic violence and gender-based discrimination in education, household chores and nutrition, as well as differential social and cultural norms. Although a quarter of all households are headed by women in the district, women don’t own either house or land in about 96% of the households.[5] Discrimination against women exists in the form of ‘Chhaupadi’.[6] Data shows that 47 percent women stay in a separate house or Chhaupadi shed and 21 percent stay in an animal shed during menstruation.35 Domestic violence is not unusual and is often linked with alcohol consumption. Although most cases are not reported, the Women and Children Office deals with four or five new cases of gender based violence per day. Similarly, child marriage and polygamy are still in practice in some parts of Bajhang. Women are less involved in economic activities than men and are mostly confined to domestic work and farming.

Caste-based discrimination is still common in many communities in Bajhang. Dalits aren’t allowed to share space with the people of other castes and in many cases are not allowed to use public facilities such as wells, taps or other water resources. Most of the Dalits are confined to traditional profession such as blacksmith work, tailoring, goldsmith and copper work as they are considered untouchables. After the abolition of the bonded agricultural labour system, known as ‘Haliya system’, by the Government in 2008, nearly 235 such families have been issued the identity card needed to receive rehabilitation support.[7] There are two settlements of Badis, the ‘most untouchable of untouchables’ as they stand at the lowest rank even in the Dalit intra-caste hierarchy in Bajhang. Most of these Badis are landless, poor and illiterate.

A key aim of Sakchyam in Bajhang is to increase financial access and promote value chain financing that could help to generate local employment opportunities which would ultimately help to minimize gender and caste based discrimination and the Haliya system. Supporting the future partner institutions to mainstream GESI principles into their organisation structure and product development will also be critical aspect of any future intervention of the programme in this area.

[1] National Population Census 2011 [2] Yarsagumba is a rare and unique herb that grows in the meadows above 3,500 meters (11,483 feet) in the Himalayan region of Nepal. In Bajhang, people from Kanda, Surma, Daulichaur, Bungal, Dhamena, Dahabagar, Dantola, Melbisauni, Sunikot, Pipalkot and Rilu are involved in the picking of Yarsagumba that is found mostly in Kada, Surma, Daulichur VDCs. Around 40 quintal is collected yearly and each quintal costs around NPR 1.5-1.6 million. It’s mainly sold in the markets of Kathmandu and China. [3] Nepal Rastra Bank (July 2018) [4] National Population Census 2011 [5] http://un.org.np/sites/default/files/bajhang_district_profile_1.pdf [6] Chhaupadi is a social tradition existent in the western districts of Nepal where Hindu women are not allowed to practice normal family activities and enter their house and have to stay in a shed during menstruation and childbirth 35 http://un.org.np/sites/default/files/bajhang_district_profile_1.pdf 36Ibid [7] http://un.org.np/sites/default/files/bajhang_district_profile_1.pdf