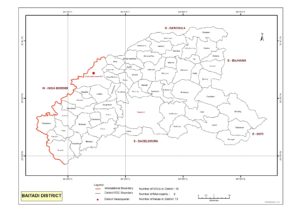 The district is connected with Bajhang, Darchula and Dadeldhura through black topped roads. Attariya Dadeldhura-Baitadi road connects it to the Terai Region.

Agriculture (including livestock/poultry), bee keeping, and cottage industries are the main economic activities of the district. Wheat, Paddy and Maize are the main agriculture commodities produced in the district along with other cash crops such as vegetables and sugarcane. Its rich forestry resource, around 54% of the total area is covered by forest, also provides potential for herb collection and processing.

The district is served by eleven different branches of ‘A’ Class Commercial Banks and one branch of ‘B’ Class Development Bank. The population served per branch is 21,800 against the national average of 8,960[1]. This indicates the need to further expand the outreach of financial services and facilities to the unbanked population of the area.

Agriculture is the main income source of majority of households and it is the core economic activity. If we analyse the use of credit products in Agriculture, only around 28% had agriculture credit out of which relatives (58%), Farmer’s group (6%) were the major sources of credit.[2] To unleash the full potential of the agriculture sector, there is a need to increase access to credit and other financial products on the district.

Besides agriculture, paddy processing (mainly grinding), furniture, hosiery and knitting are the other economic activities in the district. However, these are carried out in a very small scale.