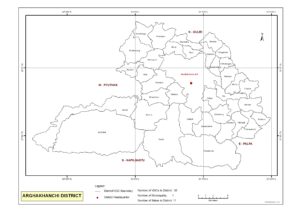 Agriculture (including livestock and poultry), cottage industries and service are the main economic activities of the district.[2]

Arghakhanchi’s total population comprises of about 32.77% Bhramins, 18.24% Chhetri, 0.12% Tharus, 11.32% Kamis, followed by others, in terms of caste and ethnicity.[4] The district faces multiple issues related to GESI. Women suffer from gender-based violence, domestic violence and gender-based discrimination in education, household chores and nutrition, as well as differential social and cultural norms even though a quarter of all households are headed by women in the district. Similarly, Caste-based discrimination is still common in many communities in Arghakhanchi.

A key aim of Sakchyam in Arghakhanchi is to increase financial access and promote value chain financing that could help to generate local employment opportunities which would ultimately help to minimize gender and caste based discrimination. Supporting the future partner institutions to mainstream GESI principles into their organization structure and product development will also be critical aspect of any future intervention of the program in this area.