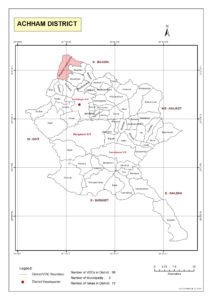 Achham is one of the five districts within Seti Zone and lies in Province 7 of Nepal. Mangalsen in the district headquarter. The district, with an area of 1,680 sq.km, is divided into 73 VDCs and two Municipalities. It has 48,318 households with a total population of 277,477 (Male 120,008 & Female 137,469). Literacy Rate in the district is 53% (women’s literacy rate is 37%).  The district, compared to other hilly districts in the region is well served by road network; more than 50% of the VDCs are connected through road network.

Agriculture (including livestock and poultry), cottage industries, trading are the main economic activities of the district. Its rich forestry resource, around 52% of the area is covered by forest, also provides potential for herb collection and processing.

Agriculture is the main income source of majority of households (around 89% of the households). If we analyse the use of credit products in Agriculture, only around 26.5% had agriculture credit out of which relatives was the largest source of Credit (36%), followed by women’s group (33%) and farmer’s group (13%)[2].

To unleash the full potential of the agriculture sector, there is a need to increase access to credit and other financial products on the district.

Women suffer from gender based discrimination in education, nutrition, social and cultural norms. Disseminating practices such as Chaupadi (women and girls spend their menstrual days in the nearby shed and not allowed to enter their own home) are still prevalent. Women are less likely to be involved in economic activities outside home and are marginalised in major decision making. Caste based discrimination is still prevalent in district. The district also has a number of vulnerable groups such as former Haliyas (bonded labours).