Sita Chaudhari of Pathlaiya village in Dhangadi was once a Kamalari – bonded labor. Due to lack of education and income generating skills, she had very little hope that her life would get any better. She had but one wish – that when she would marry and have kids, they might have better opportunities than hers. Thanks to her willpower and hard work, today Sita is living her dream.

“I could not go to school. But I have been able to send my kids to a good boarding school and that’s a dream come true,” said Sita, who’s running multiple businesses in Tikapur. She added that the greatest satisfaction is to be financially sound and capable of raising her children well. The three businesses Sita manages are – a cycle workshop, a grocery shop and a meat shop. The net profit from her businesses is over NPR 30,000. “That’s enough to send my children to a good school, take care of my daily expenses as well as save some amount,” said Sita.

While a large number of ex – Kamalaris and other rural poor from Dhangadi continue to reel under poverty, Sita has managed to change her fate with the support of a financial cooperative institution.

In 2013, Sita was able to get a loan of NPR 20,000 from a cooperative called Kisan Bahuudeshsiya Sahakari Sanstha. Since she did not have training of any sort to run a business, she decided to invest the amount for her husband. Her husband Ram Kumar Chaudhari, who was an amateur cycle repairer, established a workshop with the money. Ever since, the couple have been introduced to a lot more happiness and prosperity.

“It is true that money is power. There was a time when I would hesitate to express myself in front of others. Now because I’m standing on my own feet, I feel so free. It is very important to become independent,” said Sita. She added that economic independence boosts confidence and shapes one’s personality. “As we feel confident, we can help not only ourselves, but also lead others. I feel good that I’m also showing the way to many here,” she said. 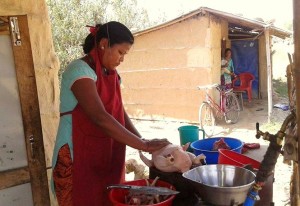 “Now because I’m standing on my own feet, I feel so free. It is very important to become independent.”

After Ram Kumar started making good money through their cycle workshop, Sita set up a pork meat shop. However, as the pork shop was not faring well, she started selling chicken. Meanwhile, she also learned repairing of cycles through her husband. “I developed so much interested in the repairing work that I later did pretty well in that as well. While I was running my meat shop, I also gave time to cycle repairing,” Sita informed. According to her, customers love her work. “Once I mend their cycles, they don’t have to come back for long. People are quite happy with my work and I also enjoy it very much,” Sita said. Most of the people in the locality are dependent on their cycles for mobility. Around 1000 people in Ganeshpur area of Tikapur, where the bicycle workshop is located, have cycles. And Sita is the person in demand when those cycles need any fixing or repairing. In addition, she also has a grocery shop which also fetches her good profit.

“After failing to get employment, we had come to Tikapur. We had little idea of what would unfold in the days to come, but there was will to make life better,” reminisced Sita. For lack of education or any other remarkable skill at hand, it was tough to get a foothold in town. An entire year passed by in search of work. “Things changed as I became a member of a women’s saving group. I came to know that we could get loans without any collateral. I went for that then,” said Sita who had subsequently become a central member of Upahar Women’s Farmer Development Center. “That was my turning point. I have not looked back since then.”

There are many homes of ex- Kamaiyas and Kamalaris in her locality. Among those stands one distinctly attractive looking house – the one that belongs to Sita. “I don’t spend all what I earn. Quite a big chunk is saved in the bank,” said Sita proudly. She is one among over 30,000 women in the region to receive loans from the cooperative, which has been providing small loans to local women for a decade. According to Prakash GC, program chief of Tikapur branch of the cooperative, 3200 women from Tikapur alone have been provided loans to support their business ventures. “Women willing to start some business for better income are encouraged. Local women’s groups are linked to us and the women are provided loans easily,” he said.

Kisan Bahuudeshsiya Sahakari Sanstha and UKaid Sakchyam Access to Finance Programme’s partnership supports the former’s adoption of technology, namely tablet devices, to add efficiency and security to the daily transactions of its women’s saving group administrators. The initiative has been launched in remote villages of Kailali districts where Sakchyam is also supporting the establishment of 4 new branches in the most rural areas.

This article originally appeared in Republica National Daily on March 22, 2016.